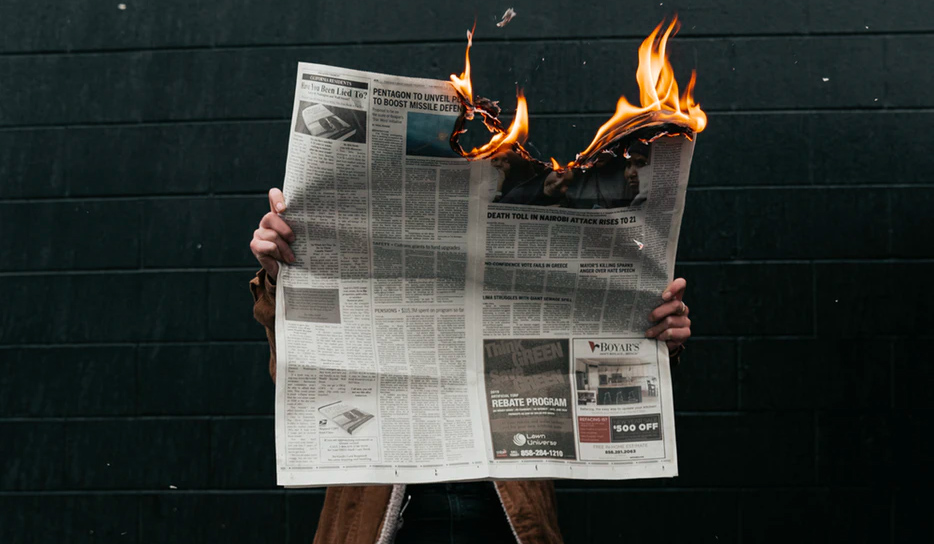 The Baldwin (Wisconsin) Herald checks in with a fine example of how the corrupt media packages political advocacy as “news.”

It begins with the headline: “Catholics run one-third of Wisconsin hospitals, putting many reproductive procedures off-limits”

This is a doozy. My compliments to the headline writer for packing so much bias and opinion into just 14 words. Let me run through them one at a time.

In the world of the Baldwin Herald, Catholics don’t “operate” hospitals. They “run” them. See, people who “operate” things are dutiful and hard-working. People who “run” things are officious jerks.

They “run” one-third of Wisconsin’s hospitals. Again, my compliments to the headline chef, this time for using a juxtaposition of words that invite the target readers (Wisconsin residents) to feel as though the hospitals “run” by the Catholics belong to the residents of Wisconsin. This is, in a roundabout way, an appeal to the ignorance of the average reader. Wisconsin “has” hospitals, the subconscious logic goes, and these Catholics “run” them.

And what is the result of Catholics “running” these hospitals? Why, they put “many reproductive procedures off-limits.”

By “reproductive procedures,” of course, the Herald means “abortion,” although they’re quick to add that neither do the Catholics hospitals offer sterilization or in-vitro fertilization.

Observant Christians of all stripes know why Catholic hospitals don’t offer sterilization or IVF. In the case of the former, Roman Catholics don’t even approve of contraception; why on earth would they approve of sterilization? And in the case of the latter, it is because IVF typically leaves a number of fertilized eggs which, after one is implanted in the mother’s womb, are destroyed. Both of these cases are consistent with the Catholic church’s teachings on the sanctity of life, so one has to wonder: Are the writers aware of the church’s teachings at all? And if they are, are they also aware of the hospitals’ consistency on policy?

We are left with two options here: Either the writers are ignorant, or they are dishonest. Explaining why it is that Catholic hospitals don’t perform abortions, sterilizations, or IVF is what responsible journalists would do. But of course that would require a detour into things like Christian theology and Roman Catholic dogma, which I suspect is icky beyond belief for the writers.

Now where were we? Oh yes: There are “reproductive procedures” that, due to Catholics “running” a third of Wisconsin’s hospitals, are “off-limits.” What does this mean, “off-limits”? Does it mean that no one in Wisconsin may obtain these services? Of course not. They are available at the other two-thirds of hospitals in the state. But as always with progressives, it is not enough that their agenda is followed in the vast majority of institutions; those who do not follow it must be harassed and demonized in the pages of their newspapers and websites.

And that’s just the headline.

Let’s go into the body of the story itself:

The predominantly black, low-income neighborhood already faced its share of challenges. Nearly a third of residents in the ZIP code live in poverty, and black infants born there are more than twice as likely to die as white infants.

Your sympathies have been aroused, but more importantly, they have been rousted out of bed by the indignation of your Racism Police. And my word, it sounds like this part of Wisconsin has an alarmingly high incidence of African-American infant mortality as compared to whites.

But it’s not so. Again: Responsible, educated, and honest journalists would know that nationwide, African-American infants have a mortality rate that’s 2.3 times that of non-Hispanic whites. This part of Wisconsin, it appears, is not an outlier at all, but the writers’ phrasing in this section invites readers to assume it is, to assume that the culprit is racism, and to assume that Catholic hospitals are, perhaps, somehow complicit. Are the Herald writers dishonest, ignorant, or just plain lazy? We may never know.

Keeler says while the ACLU works to safeguard religious liberty, it also has sued when patients were denied care based on religious restrictions. “We take the position that it (religious liberty) can’t be used to harm other people,” she says.

The average reader, taking Ms. Keeler’s words at face value, couldn’t be blamed for assuming that in these hospitals that Catholics “run,” they are in effect weaponizing church doctrine and actively harming patients. But surely that can’t be what’s happening, and in fact it’s not. What are to assume, then? That Ms. Keeler doesn’t know what we know? That she’s deliberately mischaracterizing the hospitals’ policy and operations? Once again, we’re left with two options regarding Ms. Keeler: She is either ignorant, or dishonest.

And what, again, of the writers of this article? Did they not spot Ms. Keeler’s obvious mischaracterization of the services and policies of Catholic hospitals? Where is the addendum to her quote, in vogue among so many members of the media, that goes something like this?

“We take the position that it (religious liberty) can’t be used to harm other people,” she says, without evidence.

It goes on and on like this, for over 3,300 words. If you visit the site, note the two concern trolls in the sidebar: One physician says that following Catholic directives on ethics created a “moral conflict … (that) eats away at you.” Another says Catholic hospital policy is

“stifling” for physicians. Resident physicians who want to learn how to do abortions but train in Catholic institutions, for instance, have a hard time learning how to do them.

The implication, of course, is that Catholic hospitals are actively preventing physicians from obtaining instruction in performing abortions, or worse, somehow forcing physicians to do their residencies in their hospitals.

This is an amazingly dishonest piece of work by Parker Schorr and Rikha Sharma Rani, and a shameful display by the Baldwin Herald for running it. Sadly, though, it’s not remarkable, but just another example of how the corrupt news media targets, isolates, and demonizes the people and institutions that dare to live lives and run businesses that don’t embrace the most radical of progressive ideas. It’s not journalism. It’s ignorance, wrapped in bias, packaged as serious news coverage.