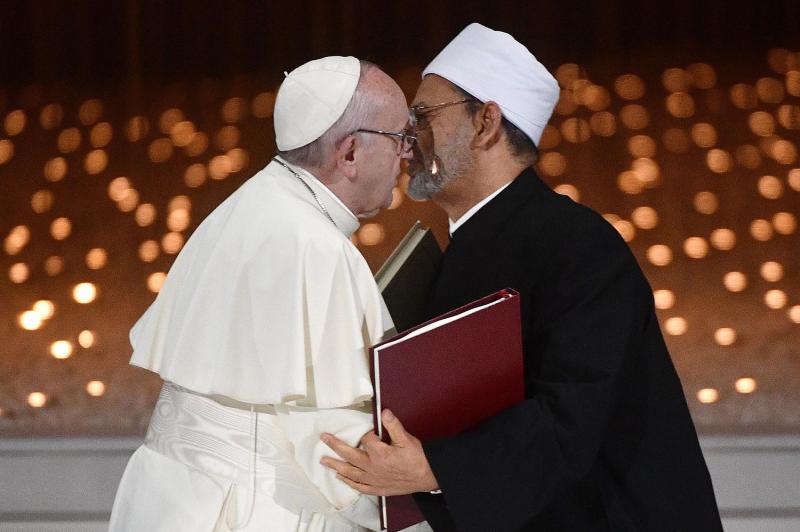 We all know the old saw, “Preach the gospel at all times, and if necessary, use words.” Whoever the original author was, he or she seemed not to know that the word “gospel” means “good news,” which means there’s a story to tell. Apparently Pope Francis is unaware of that. In fact, he seems unaware of the universality of that good news as well.

During a visit to the Pilo Albertelli classical high school in Rome on Friday, Francis was asked this question: “If an atheist came to you and asked you a fundamental reason to start believing what would you answer?” The Pope’s answer, as well as his answer to a follow-up, is found at the Vatican website, and is offered here in toto via Google Translate:

Let’s go to your first. When I taught what look and what words I had towards believing children or of other religions … But in Argentina there is a social phenomenon, which is the migratory phenomenon. After the two great wars there were waves of migration from Europe, also from Asia Minor and the Italians … Do you think that 40% of Argentines have an Italian surname, almost the other 40 Spanish. Then Poles, Russians, all … even Arabs, whom we called “Turks” because they came with the passport of the great Ottoman Empire. There is a mixture of blood, a strong mixed race in Argentina – I am the son of a migrant – and this has made a culture of coexistence. I went to public school and always had companions from other religions. We were educated to coexistence: “There is a Jew, Russian ah … Come, come! I am a friend of Russian! “. They said Russian because the majority of the Jews came from Odessa, some from Poland but the majority from Odessa. Then there was some Arab, Lebanese, Syrian … “Ah, Turkish! Come come!”. This was Mohammedan, this was Jewish … But we all played football together, we were all friends. This taught me so much, that we are all the same, all children of God and this purifies your gaze, it makes you human. In Argentina there is a small group of too closed Catholics who do not want Jews, do not want Muslims but this group, at least I have never liked it, is a group that is on the corner, they have a cultural magazine but they do not have incidence in society and when I taught I looked at them as they were, this is the secret. You must be consistent with your faith. It didn’t occur to me and it doesn’t have to be like saying to a boy or a girl: “You are Jewish, you are Muslim: come, be converted!”. You be consistent with your faith and that consistency is what will make you mature. We are not in the times of the crusades. It is a bad thing but it made me suffer so much, a step of the “Chanson de Roland”, when the Christians, the crusaders had won the Muslims and then a queue of all the Muslims was queued and the priest was in front of it and a soldier. The priest in front of the baptismal font and everyone came – read that passage – he asked: “Either the baptism or the sword”. This has happened in history! They also do it with us Christians in other parts, they are also doing it but what happened to us “shame” (shame) because it is a story of forced conversion, of not respecting the dignity of the person. This is why my experience was natural with people of other religions because my dad my dad’s job was an accountant and he had so many Jewish business clients and they came home, it was normal and I didn’t have this as a problem. But it must be normal. Nothing to leave them aside because they have another faith. And you. Damiano, what word would he use to convince someone to become a Christian …

If you asked her a fundamental reason to start believing …

The first is all. In front of an unbeliever the last thing I have to do is try to convince him. Never. The last thing I have to do is speak. I have to live consistent with my faith. And it will be my testimony to awaken the curiosity of the other who says: “But why do you do this?”. And yes I can speak there. But listen, never, never bring the gospel with proselytism. If someone says you are a disciple of Jesus and comes to you with proselytism, this is not a disciple of Jesus. Proselytism is not done, the Church does not grow by proselytism. Pope Benedict had said it, it grows by attraction, by testimony. Football teams do proselytism, this can be done, political parties can be done there but with faith no proselytism. And if someone says to me: “But why you?”. Read, read, read the Gospel, this is my faith. But without pressure.

Now, first a pair of caveats: one, it’s Google Translate, and there may be some bad translations there. Second, it’s important to keep in mind that Pope Francis frequently uses language the way a monkey uses a watch–he can play with it endlessly without ever having a clue of it’s purpose.

That said, this is a genuinely astounding statement for the head of the world’s largest communion of Christians to make. “You be consistent with your faith and that consistency is what will make you mature. We are not in the times of the crusades….The priest in front of the baptismal font and everyone came–read that passage–he asked: “Either the baptism or the sword.” So for Francis, the only way one can proclaim the gospel is either 1) be silent, or 2) threaten to kill people. Because it’s still the 12th century, and those are the only two choices these primitive times give us.

For Pope Francis, it would seem that “evangelism” consists of doing good deeds in the hope that someone will ask why you do them. One can never initiate a conversation, because that would be “coercive” (or worse, would constitute “proselytism,” which as we all know is pretty much the worst sin Christians can commit in the eyes of the world, “proselytism” being defined as any verbal effort made with the conversion of a soul in view).

Of course, it doesn’t help that Francis is so uninterested in the whole subject of making disciples that he doesn’t even listen to himself when he talks. “In front of an unbeliever the last thing I have to do is try to convince him. Never. The last thing I have to do is speak. I have to live consistent with my faith. And it will be my testimony to awaken the curiosity of the other who says: “But why do you do this?” And yes I can speak there.” So which is it? Can I speak or not? Apparently I can only speak when someone directly asks me why I do what I do. And if they never ask, or if they see my good deeds and say, “looks like Christians can be good people just like atheists, Muslims, Jews, Buddhists, and Wiccans”? Then I’m stuck, I guess. I’ll have to keep my mouth shut and not tell them of “Christ in you, the hope of glory…the one we proclaim.” (Colossians 1:27-28) That would be “proselytism.”

To be clear, let me add that good works done by a Christian can potentially have an important role in our evangelism. But they never stand alone without the gospel. There is no good deed we can do that cannot be done by a secular person, or those of any other religion. By themselves, our good works says nothing about the hope that is within us. That must be told, or it will never be communicated. It would seem, however, that in a world with as many political and scientific crises as the Pope has chosen to meddle in–to speak first, and act later, if at all–communicating the unique, life-giving, transformative, Christ-proclaiming message of the gospel is the least of his worries.

What's In Your Locker?
Recognizing Critical Theory
The Baby Is Still Not That Important