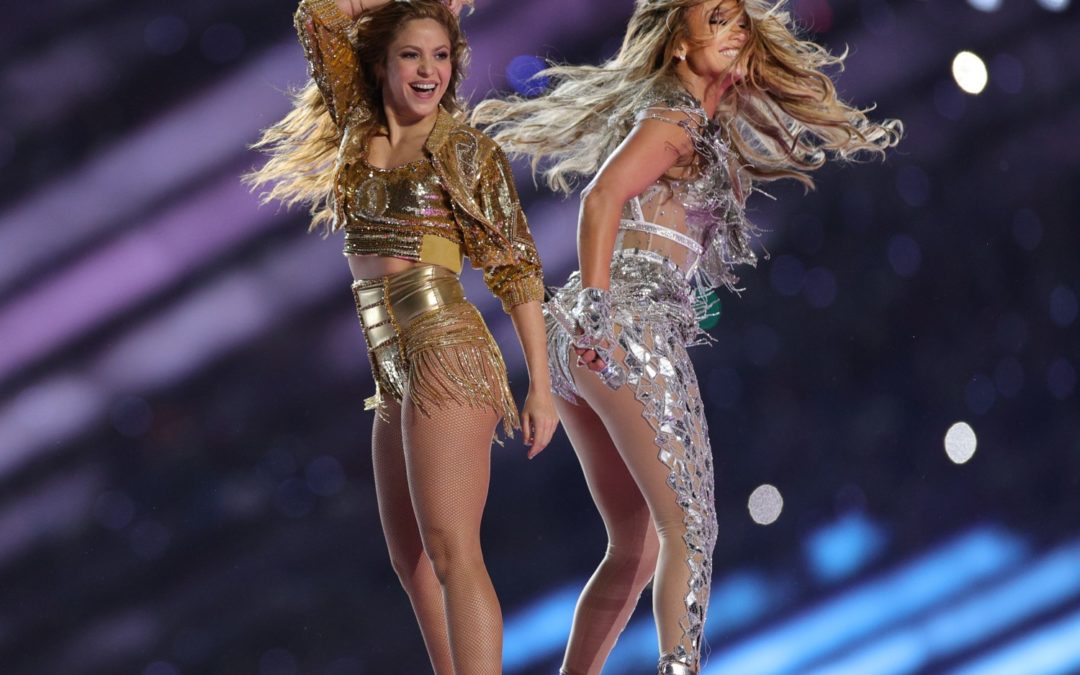 I’m not a football fan. I keep up with the NFL just enough so that I can talk to my parishioners and not sound like an idiot. I think of the Super Bowl the same way as Ebenezer Scrooge thought of Christmas, as a “false and commercial festival, devoutly to be ignored.” But when I checked on the result this morning, I found that the halftime show was getting as much attention as the game. So I took a look (you can find it in its entirety here).

I should also say that I’m not a fan of 21st century popular music. Yes, I’m a geezer, and yes, I’m a classic rock guy. Before this morning, I had never heard anything by either Jennifer Lopez or Shakira, so I watched and listened with the eye and ear of a noob.

First, the good. There were some catchy tunes, though none went on long enough for them to get stuck in my head (it was as if we were hearing a Latinized second side of Abbey Road). And I liked the brief sampling of Led Zeppelin’s “Kashmir,” though what it had to do with anything I don’t know. (This is in contrast with the politicized use of Bruce Springsteen’s “Born in the U.S.A.,” which was as tone-deaf and illiterate as the Republican Party’s use of it in the 1980s.)

Now, the bad. The catchy tunes were similar enough as to be barely distinguishable. The guy dressed up like a baked potato about to go in the oven was silly. Politicizing the show, most obviously with the children in cages, was forced and out-of-place, not to mention incoherent, just like a lot of what the NFL does these days.

Worst of all was the in-your-face display of the schizophrenia of modern feminism. Crotch-grabbing, booty-shaking, pole-dancing, hyper-sexualization of women alongside children singing about empowerment and “getting loud” while Lopez tells them “ain’t nobody gotta tell you what you gotta do.” I guess if you want to be a pole-dancer, and put yourself on display for the satisfaction of men, that’s what you gotta do. But the truth is that it’s the extremely rare sex worker (pop musicians excepted, apparently) who does it because she wants to. Most of the time it’s because the need for drugs, or the violence of a pimp, or the desperation of poverty, or the inhumanity of a trafficker forces them into it.

The fact is that the Super Bowl, like a lot of big sporting events and male-oriented convention, is a magnet for the exploitation of women, and the performance by Lopez and Shakira did nothing but feed right into that. That’s a fumble of game-changing proportions, Commissioner Goodell.

Stop Saying "We"
The Baby Is Still Not That Important
News Flash: Catholics Believe Stuff