I Was Hoping For A Chair 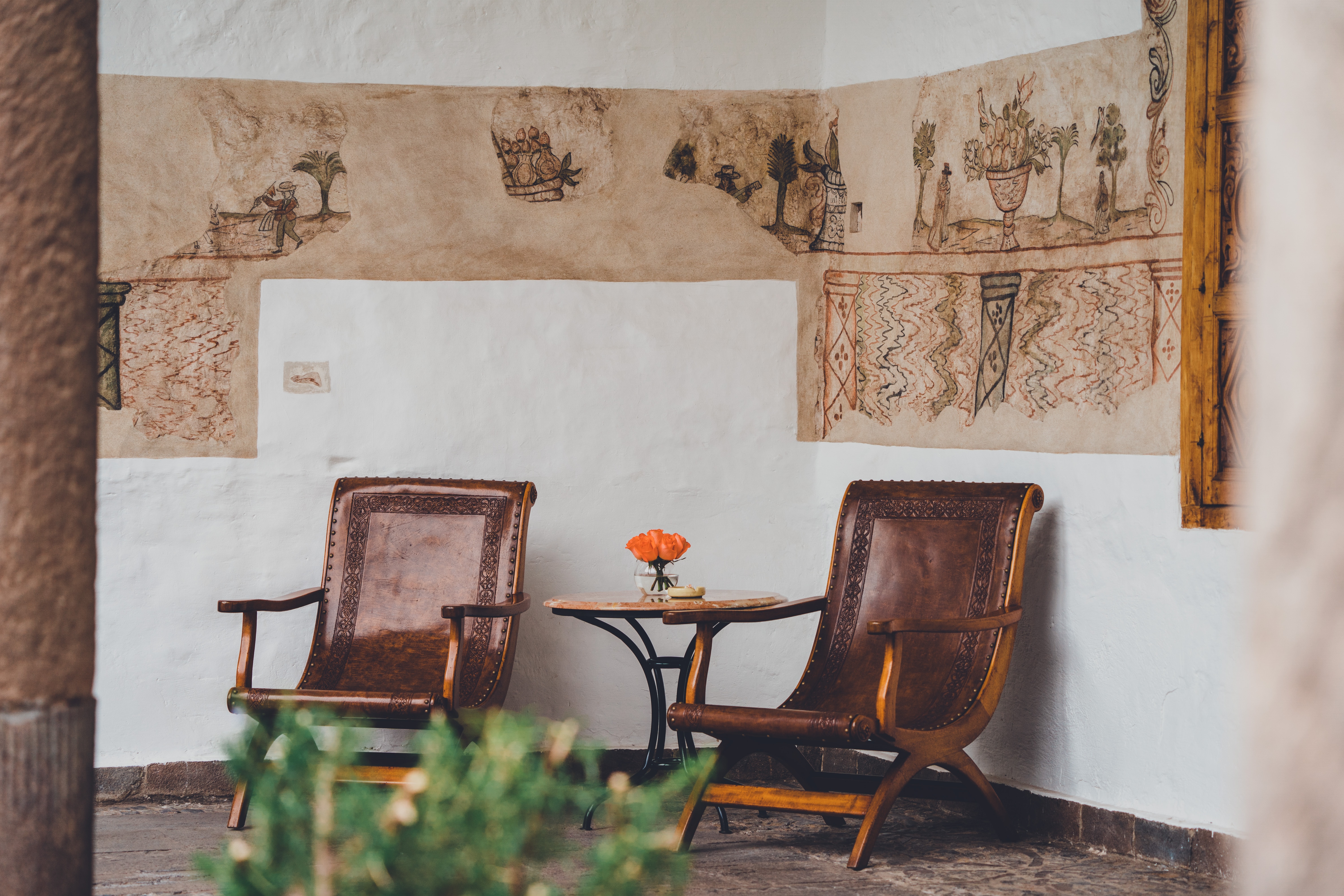 I have often been in the way of visiting older people and hearing the anxiety that heaven, though nice, will probably be boring. Sitting around on a cloud, praising God for all eternity, stuck with all the relatives who will probably be just as irritating in heaven as they were on earth is not appealing. The best illustration of this view is an old Far Side Cartoon. An angel welcomes a line up of people, one by one, handing over a harp and a halo. Underneath is the devil, handing each hell-bound wretch an accordion.

Of course, no one today thinks they are going to hell. The average American, if she, or he, or whoever thinks about it at all, imagines that heaven is the obvious destination, or annihilation, which would probably be fine too. Recently, however, I’ve run into two views of heaven and hell that disturbed and alarmed me. I thought it would be useful to point out exactly how they are totally and ridiculously wrong.

The first picture of Heaven is painted in the Amazon mini-series based on Neil Gaiman and Terry Pratchett’s beloved book Good Omens. Good Omens is a mastery of light humor. Gaiman and Pratchett raise the pressing questions of death and the afterlife , and then backing away before answering any of them. As a Christian I enjoyed the book and miniseries immensely and appreciated the humorous twist on the well worn (for me) biblical narrative. Their faithless effort to find beauty and goodness in God’s creation didn’t shake me off my faithful one in the least.

One portion of the miniseries disturbed me, however, and I think it is worth teasing out because I expect many Christians hold it by default. And that is that heaven is going to be a bright white minimalist box with no comfortable place to sit down, nothing to read, and no one to talk to—in other words, Hell.

The angel Azirophel and the demon Crowley realize in the beginning of the series that the apocalypse is nigh. Their comfortable friendship with each other prevented the successful completion of their individual missions. They are neither of them good as angels or demons. Moreover, they, like humans, love living on earth. They are really—and I think this is the point—very good people, trying to wend a way between the two questionable extremes of God and the Devil. Earth is their preferred home. And if you peer longingly into Azirophel’s bookshop you will feel a nostalgic twinge. I immediately wanted to go live there. It is absolutely heavenly.

Azirophel especially hasn’t followed directions and so gets called up to heaven to explain his various errors, like the loss of his flaming sword which he happened to hand to Adam when he and Eve fled the garden of Eden (“They looked like they might need it,” he explains to Crowley, who says he totally understands). Arriving in heaven in his impeccably white suit, Azirophel climbs up bespoke, industrial, airy stairs and finds himself in an empty, white, low ceilinged room, full of light, with one spinning globe in what might be the middleman , though the room really has no true center. There are no chairs. There are no pictures. Indeed, there is nothing. It is blank and very clean. Kon Mari would be so proud.

It should be noted that hell is no better. Dark, dirty, grotesque, replete with crawling insects and flies, it is the opposite of the clean bright emptiness of heaven. The lighting is bad, the ceilings are too low, and there is lots of screaming. Crowley, whenever he is called to give an account of himself, gets away as soon as he can, back to the comforts of earth.

And that is the point. Gaiman and Pratchett paint such a comforting, warm, inviting picture of earth that one understands that heaven could not possibly live up to the charms that already exit here—the beautiful cars, the gorgeous food, the breathtaking landscapes, the books, the freedom, the joy. Unless you don’t love sitting down in the comfortable warmth of a perfectly arranged room, you will not be enticed by the blank, bright, emptiness of heaven.

The second heavenly picture infiltrating the American imagination is propagated by motivational guru Ed Mylett, and by extension Rachel Hollis. This is no more Christian than Good Omens, but is perhaps more appealing. Ed Mylett describes his strange expectation of one day dying, going immediately to heaven, and there being introduced to an ideal, perfect version of himself.

God created him, he explains, with unrealized potential. His job is to live up to the heavenly version of himself that God originally created. Whatever he does, if he does it to the fullest without holding anything back, he will become the self God imagined him to be. This potential ideal self is being kept in heaven, waiting for Mylett to enact it, to realize it, to chase it in one mad, intense ambition filled lifetime.

When Mylett finally dies and goes to heaven, he will be presented to this other self. And that is where the anxiety lies. If he recognizes himself because he has lived up to his potential, he will experience heaven. He will be perfectly happy. He will have chased this ideal self and caught it. His life on earth will have been worth something.

If, on the other hand, he holds back, if he is reticent, if he is ungenerous, if he doesn’t take risks, if he doesn’t enjoy the gifts of this earth, if he squanders his strength and abilities, if he gives in to poverty and the creeping weakness of age, if, in other words, he doesn’t live into his potential, when he goes to heaven he won’t recognize his true self. He won’t have even chased that other self and so, when introduced, there will be no spark of recognition. He will be in hell.

The aesthetic characteristic of this heavenly experience, so far from boring, is infinitely bleak in its malleability. Whatever you look like and have accomplished in the course of your life will determine what your personal heaven looks like. You are going there to meet yourself. Look, therefore, into the mirror and take a realistic assessment of what you see. Is this the person of your dreams? If you died tonight, what answer would you give your heavenly? Have you met your fitness goals? Do you have the job you always wanted? Are you even rich?

There are two clear, practical conclusions to draw from these two “heavenly” visions. The first is that earth is your true home. In both cases, earth is the focus of human happiness. For Ed Mylett, how much you enjoy life here, how much you push yourself towards the fullest measure of the good life now, will determine how much you even want to be in heaven later. Where you go later will not be much of a consolation and is certainly nothing to look forward to—unless you’ve already maxed out your potential. Hope you don’t take too long reading this article. You probably need to hit the track. Likewise, in the minimalist vision of Good Omens, there won’t be anything nice to do or eat or think in heaven. If you haven’t had your fill of sushi, good books, and pretty sunsets, you might want to skip that earth destroying styrofoam soup cup and go out for dinner, preferably somewhere with padded chairs.

The second is that heaven has nothing to do with God. And why would it? God is apparently helpless. He creates people with a great lack, and then stands afar off to see how they are getting on. Moreover, God must himself suffer a shortage of imagination. The place where he lives is only a great empty board room, a place where you are evermore confronted with yourself. Heaven is not the place where God lives in inexhaustible beauty and light. It is not a perfectly prepared room of consolation and rest. It is not the place where all your anxieties and sorrows are lost in the transfixing gaze of a creative, beautiful, fascinating, redeeming God.

Most people believe they are going to heaven one way or another, because God is not mean. True Christians, however, know that the people who go to heaven will go there first and foremost because they want to be with the God so marvelously revealed in the scriptures. Heaven is his home, and he will ultimately expand it to fill the whole earth, remaking this place of ruin, sin, dirt, and unrealized potential. We know at least three things about heaven from the scriptures.

First, it is a place of consolation. John, in the book of Revelation, sees all the tears of every eye being wiped away. This astonishing vision recalls that ancient, intimate line that God already catches every tear of every beloved in a bottle. When Jesus describes Lazarus, the poor beggar, perished at the gate of the rich man, he says that the angels take him to “Abraham’s side.” There he is consoled, comforted, finally the recipient of all the “good things” he so lacked on earth.

Second, there is somewhere to sit. God at least doesn’t have to stand up forever. Jesus, finishing his work of the cross, ascends to the right hand of the father to “sit down.” His work is finished. And we, by the power of his inexorable resurrection, are caught up with him, even now, seated spiritually with him, though we continue to groan and long for that perfect, glorious rest. John, at the same time as seeing all the tears of every believer wiped away, sees the Marriage Supper of the Lamb, that great meal we taste and savor every Sunday with increasing longing. It’s not the kind of meal you eat standing up, in haste, your staff in your hand. It’s the kind where you sit down and rest for a thousand years at least, while somebody else plays a harp.

Third, heaven will not be a boring place where you congratulate yourself. Heaven will be a city, that original spoiled garden remade in a rich, perfectly apportioned square where people from every place and speaking every kind of language gather in a great multitude to finally behold their Lord. The deep, ever increasing anticipation of such great beauty, of such joy drives Christians to live a different kind of life even now. Dissatisfaction, hunger, lack, ugliness, discomfort, and poverty now only turn the believer’s eyes to that greater and more perfect beauty.