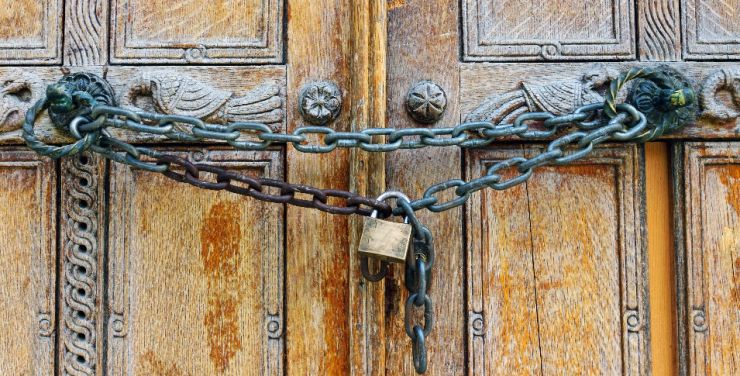 New York City mayor Bill de Blasio has had it with religious types insisting on continuing to meet for worship amid the COVID-19 crisis. They are ignoring him, and according to the Washington Examiner, they’re gonna regret it:

“A small number of religious communities, specific churches and specific synagogues, are unfortunately not paying attention to this guidance even though it’s so widespread,” the New York Democrat said Friday at his daily press briefing.

“I want to say to all those who are preparing for the potential of religious services this weekend: If you go to your synagogue, if you go to your church and attempt to hold services after having been told so often not to, our enforcement agents will have no choice but to shut down those services,” he added.

“If that does not happen, they will take additional action up to the point of fines and potentially closing the building permanently,” he said.

Permanently. One has to wonder whether Hizzoner knows the definition of that word.

I understand the frustration with people who won’t take the pandemic seriously for whatever reason. The left isn’t taking it seriously by politicizing it, latching on to the absolute worst possibilities as a way of scoring points against Trump, and hypocritically condemning him for saying things very similar to those said by Nancy Pelosi and Bill de Blasio. The right has lots of people who, for reasons that defy logic, keep comparing COVID-19 to the flu, and downplaying potential for disaster if the medical system becomes overwhelmed. Then there are the young people who, because they aren’t paying attention and are terminally hedonistic, wantonly put others in danger lest their fun get interrupted.

Churches irresponsibly gathering together hundreds of people in the midst of the medical war zone that is New York City are not witnessing to the gospel, but sending the message to their fellow New Yorkers that they don’t care about what happens to them. That’s not agape founded in faith, but self-centeredness founded in self-righteousness.

All that being said, one can’t help but wonder if this episode has given us a glimpse into the blackened heart of a would-be dictator. Permanently shuttering religious buildings paid for, built by, and owned by congregations–in essence, stealing them–makes no sense as a response to a crisis that will, one way or another, be over in a few months. It simply comes across as vastly excessive punishment by a politician who can’t stand the idea of someone not doing what he says.

As for the legal implications of the mayor’s suggestion, I would think the First Amendment would have something to say about the expropriation of religious property motivated by nothing more than pique over being ignored. What de Blasio wants to do is nothing more or less than what the Chinese Communists are doing to churches and mosques all over their country. At least he hasn’t said he wants to put the offenders into re-education camps. Yet.

These are tough times, and being a public official isn’t easy when difficult decisions have to be made and every imbecile with a computer and wifi is constantly telling you how to do your job (that includes many professional journalists, many of whom are abysmally ignorant and supremely self-confident in their opinions at the same time). But public officials like the Mayor of New York, babbling in public about wanting to commit violations of basic freedoms, deserve everything they get.

Whatever Happened to Mark 12:17?
The Gospel is Not At Stake
The Holy Family: Wokes Wrong; Cons Confused